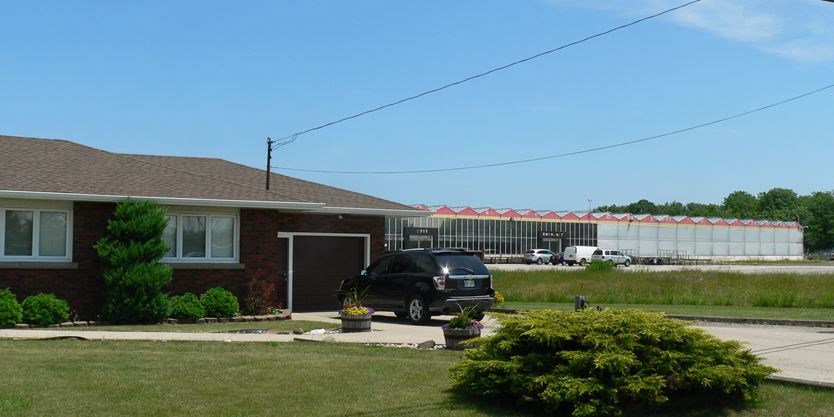 Hamilton councillors have asked staff to craft a bylaw that will allow the city to crack down on nuisance odours coming from cannabis operations (back, right) such as this one in upper Stoney Creek and Green Mountain Road. – Kevin Werner/Torstar/file

Stoney Creek Coun. Brad Clark introduced a motion at the June 13 council meeting for staff to rewrite the city’s nuisance bylaw to address cannabis grow operations, such as the one located on Green Mountain Road in a former nursery across the street from Pros Golf Centre driving range at 398 Upper Centennial Pkwy.

He said since Health Canada does not enforce odour, dust or lighting complaints from residents, the city needs to step in and do something to protect the public

“Health Canada will not regulate where personal use licenses are combined in this kind of grow op,” said Clark.

He said the structure — which has been a neighbourhood problem for nearly two years — grows cannabis under the personal use license medical marijuana requirement. A number of patients had banded together and merged their licenses for the operation.

“Subsequently, we are now finding ourselves with 22,000 plants growing in their greenhouse,” he said.

Clark said the only way to enforce problem issues is to change the municipality’s nuisance bylaw, which includes odours, lighting and dust.

Resident Dale Biehn, who lives near Upper Centennial Parkway and across the street from the golf centre, has complained for years to city officials about the “suffocating” odour of marijuana that has forced his family to remain in the house they have lived in since 1962.

“This type of operation does not belong here so close to the city,” said Biehn. “It belongs in an industrial area.”

Glanbrook Coun. Brenda Johnson, even though she doesn’t represent the area, has fought against the cannabis grow operators on behalf of the residents living within the neighbourhood.

“The people living in the area are absolutely horrified,” she said during an earlier council meeting. “They can’t even sit outside and have a cup of coffee or have a barbecue with their families.”

The motion, approved by councillors, would direct staff to begin the process of amending the city’s bylaw.

Flamborough Coun. Judi Partridge applauded the enforcement, saying odour and other nuisance issues have become prevalent across the city.

“Certainly in Glanbrook, and upper Stoney Creek and it is most certainly happening in Flamborough and in Carlisle,” she said.

Ken Leendertse, director of licensing, said the report should be completed within the next few months.

“Legal (staff) is needed to review all proposed bylaws,” he said.

He said the goal of the bylaw is to address those nuisance issues that residents have been complaining about.

“With a proposed bylaw, we can seek compliance and force operators to address light and odour issues”

The Municipal Act does allow cities to regulate issues such as noise, dust, and odour. Hamilton has specific rules overseeing noise and dust, but not odour.

The Environmental Protection Act allows the province to investigate odour complaints such as the city’s central compost facility, which was eventually shut down for a period of time.