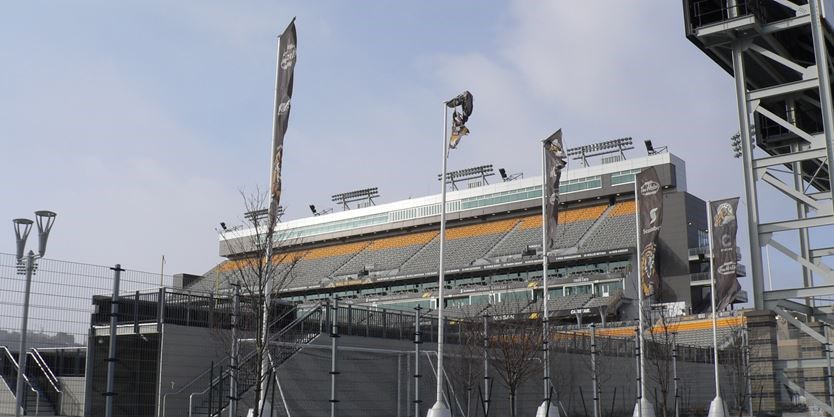 Hamilton councillors agreed to continue pursuing a possible bid to host the 2030 Commonwealth Games. Hamilton, which built Tim Hortons Field for the 2015 Pan Am Games, is so far the only declared Canadian city to seek to pursue a bid. – Kevin Werner/Torstar/file

P.J. Mercanti of the Carmen’s Group, who is helping to spearhead a private sector effort to land the 100th Commonwealth Games for Hamilton in 2030, says the event will prove to be beneficial and affordable for both the city and taxpayers.

“We want to make sure that this is a major net positive for the City of Hamilton,” Mercanti told city council at the June 5 general issues committee meeting. “We will not move forward unless it is a win for every part of the city.”

Yet, preliminary cost estimates from the 2018 Commonwealth Games held in Australia reveal the price tag was over $1.8 billion. The cost to hold the Commonwealth Games in Glasgow, Scotland in 2014 and the 2022 games in Birmingham, England is about $1.5 billion, said Commonwealth Games Canada officials. They said about $1 billion is used for operational costs, while $500 million is for capital improvements.

If there is a funding arrangement with the federal and provincial governments to pay for the games, Hamilton could conceivably be responsible for shelling out about $500 million for capital and operating expenses, said Stoney Creek Coun. Brad Clark.

Mercanti disputed how much Hamilton could be on the hook for, calling Clark’s figures “not necessarily true.”

He said the business case for the games need to be prepared first, while also incorporating how to maximize potential revenue such as naming rights and other new revenues.

“There is a whole plethora of revenue streams that could be available that we will look at,” said Mercanti.

Hamilton councillors unanimously approved a motion by private group, Hamilton 100, to lay the ground work for the bid for the 2030 games. A report from staff, including a memorandum of understanding with Hamilton 100, will be presented in early November. The group must submit a hosting proposal document to Commonwealth Games Canada by Nov. 22. The document will include the impact of the games, sports programs, dates, venues, finances and stakeholder assistance.

Commonwealth Games Canada is scheduled to select its preferred city to host the games in the spring of 2020.

Council’s decision is a complete reversal of its 2017 decision to oppose any attempt by staff to examine Hamilton making a bid to host the Commonwealth Games.

Mercanti applauded councillors 13-0 vote, saying it allows the private sector group to move forward to submit a bid document. Hamilton 100 is covering the cost of the bid submission, which could cost, Mercanti said, hundreds of thousands of dollars.

“This gives us the green light to prepare the business plan,” he said.

Mercanti said Hamilton is, so far, the only Canadian municipality to declare its intentions to submit a bid to host the 2030 Commonwealth Games. Edmonton council recently rejected an attempt to bid on the games.

The games began in Hamilton in 1930, and were then called the British Empire Games.

“The 100th anniversary is a once in a generation opportunity,” said Mercanti.

Hamilton’s hosting bid also received a boost when Commonwealth Game Canada officials announced they will be in Hamilton at the end of July to tour the city.

“It’s a good sign, a positive indication they are taking our bid and our exploration seriously,” said Mercanti.

Mayor Fred Eisenberger was supportive of the bid process. He said without the 2015 Pan Am Games, Hamilton wouldn’t have been able to afford to build Tim Hortons Field to replace the aging Ivor Wynne Stadium.

“There is nothing but opportunities here,” he said. “We shouldn’t forget about the benefits.”

But for some councillors the potential cost of $2 billion — which was the budget for the Australian games — was a shock for some of them to absorb.

“I’m really not skeptical,” said Mountain Coun. John-Paul Danko, who compared how the $1 billion light rail transit project was studied for over a decade, but for a $2 billion event the process is moving faster than expected.

“I think there are a lot of assumptions out there and analysis that needs to be done.”

Flamborough Coun. Judi Partridge said there are too many unanswered questions, including if the province will provide the necessary funding for the games.

“I’m very concerned the health of this city is on a good foundation,” she said.

Clark said Hamilton needs to do its due diligence before acting like cheerleaders for the games.

“We need to go into this with our eyes wide open,” he said. “We need to do our homework. We need to make sure we can afford it.”