The Ross family, including Anita and Mike and two of their three children, Dylan, 14, and Cody, 12, receive the keys to their new home Aug. 23. – Julia Lovett-Squires/Torstar 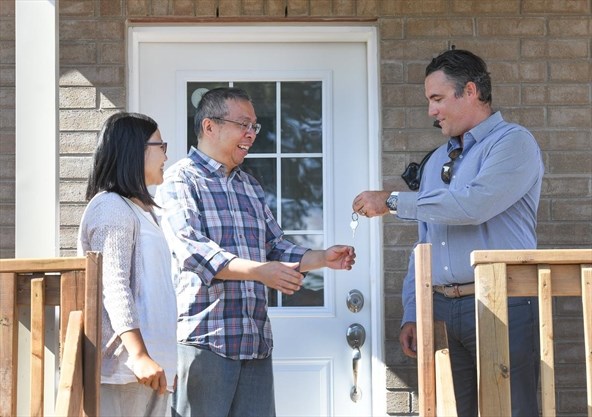 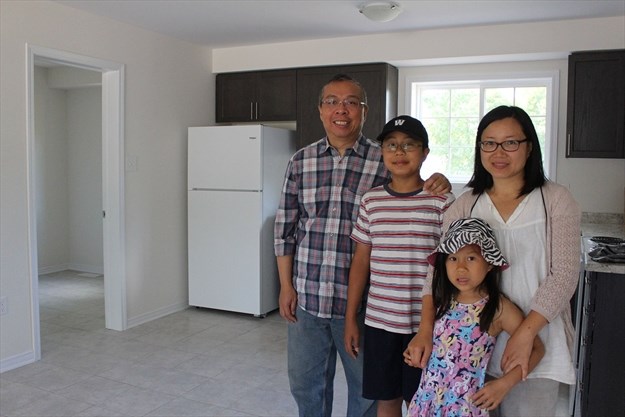 The Pang family: Francis, William, 11, and Irene and Olivia, 7, stand in the kitchen of heir new home on Dennis Avenue on Fri., Aug. 23. The family got the key during a Habitat for Humanity celebration ceremony and will move in next week. – Julia Lovett-Squires/Torstar

The dream of home ownership was realized for three families who each received keys to their homes at a celebration ceremony in Waterdown Aug. 23.

Standing outside the newly constructed Habitat for Humanity Hamilton townhouses on Dennis Avenue, builders, dignitaries and volunteers congratulated the families on their new homes and handed over the keys and mortgages.

“Thank you all, it’s with our collective effort that we can help serve local families through home ownership,” said Sean Ferris, executive director for Habitat for Humanity Hamilton.

Thanking volunteers, community partners and donors, dignitaries including Flamborough-Glanbrook MP David Sweet and Ward 15 Coun. Judi Partridge took turns speaking to the importance of what it means to help families own their own homes

“This is such an exciting day and I can’t tell you how happy I am for our community,” said Partridge.

“Today it’s easy to see that we have three families who are going to have a home that they, under normal circumstances, wouldn’t be able to have,” said Sweet.

“I also am just beyond excited for the families. This is the beginning of a whole new part of their life, it’s a new chapter for them,” added Partridge.

The Ross and Pang families, two of three families in attendance, were overjoyed. The third family, who did not wish to be named, sent a statement of appreciation and heartfelt thanks to Habitat for Humanity Hamilton for their new home.

For the Ross Family, it was a dream come true.

Ross said that she and her family of five were previously living in a two-bedroom apartment before looking into their options and discovering Habitat. And after years of waiting for a build in their community, it has finally become a reality.

“It means everything to us. It means stability and I don’t know, I just don’t know. It’s very overwhelming” she said standing with her husband Mike and two of their three boys Cody, 12 and Dylan, 14.

The Aug. 23 celebration was an exciting one for the Pangs, including Francis and Irene and their children William, 11 and Olivia, 7.

“A lot of things are beyond our imagination,” he added.

The family, overwhelmed by the kindness of strangers and excited to settle into their new home, remarked on events taking place around the globe. Francis and Irene came to Canada from Hong Kong and have been in Waterdown for 12 years. Watching the protests taking over the region where they still have family has been difficult.

“It makes us treasure our freedom here — freedom of speech, freedom of expression, freedom of protest,” said Francis. “It’s not easy for us to just sit here and enjoy our new home while we know there are people on the other side of the world struggling.”

Reflecting on those realities, the Pangs said they take nothing for granted and are looking to the future and endless possibilities in their new home, which was made possible thanks to Habitat and its crew.

“This is a reminder that there is still goodness and kindness in the world and it’s not just like whatever regime, whatever selfishness or divisiveness you see in the world. It’s not the whole story.”

A community truly came together over four months to build three families a home — the first Habitat project in Waterdown. In addition to the Habitat for Humanity Hamilton team, build title partner Mikmada Homes helped bring the project to fruition with the support of the Realtors Association of Hamilton-Burlington, Excel Heating and Air Conditioning, Genworth Canada, CGC Inc., Dulux Paints, Quality Sterling Group and the Rotary Club of Waterdown. In addition to the community sponsors, more than a dozen teams of 10 to 12 people volunteered their time on site during the construction phase.

“To see the joy and satisfaction on their faces is so exciting, especially those of their children because I know that this is really going to open up opportunities for them in the future that they might not have had,” said Peter Walberg, Habitat’s construction program manager.

In addition to some sweat equity, the new homeowners will pay geared-to-income mortgages to Habitat for Humanity, which gets invested into the Fund for Humanity to build more affordable homes.