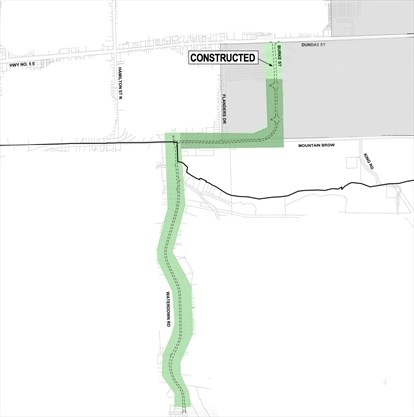 The Waterdown north-south bypass, seen above in green, is slated to run from Dundas Street, south on Burke Street to Mountain Brow Road, before travelling south on Waterdown Road to Highway 403. – Mac Christie/Metroland 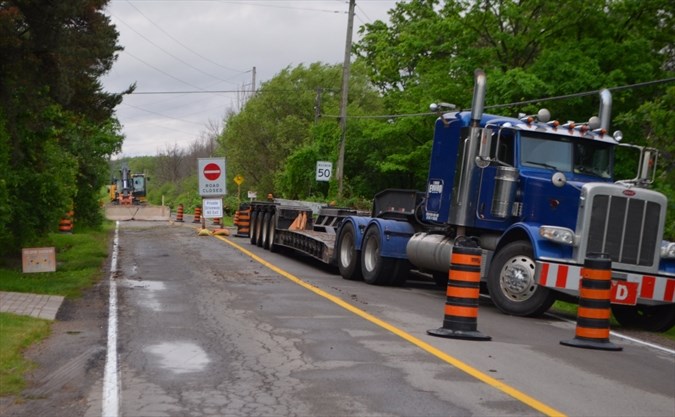 An 800 metre stretch of Mountain Brow Road in Waterdown from King Road to Flanders Drive was permanently closed by the City of Hamilton on June 10. The closure will facilitate construction of a section of the Waterdown north-south bypass. – Mac Christie/Torstar

The City of Hamilton permanently closed Mountain Brow Road in Waterdown between King Road and Flanders Drive on June 10.

The closure, which was announced by the city on June 5, was originally approved through the Waterdown road corridor class environmental assessment.

Ward 15 Coun. Judi Partridge said the closure will facilitate the construction of part of the Waterdown north-south bypass.

“We are going to be pushing ahead very, very quickly on this bypass,” she said.

Partridge said the closed section of Mountain Brow Road will be replaced with a multi-use pathway and stormwater drainage improvements necessary to facilitate the Mountainview Heights development.

Local access for existing residents of Mountain Brow will be maintained throughout construction, but traffic accessing Mountain Brow from King Road will be detoured along North Service Road.

While traffic from King Road will no longer be able to access Mountain Brow Road, the Waterdown South secondary plan indicates that a local road connection will be provided to the adjacent subdivision and “the road network shall be designed to create an indirect route to King Road so that traffic flow to King Road is not promoted.”

The City of Hamilton’s manager of infrastructure planning, Sally Yong-Lee, told the Review in 2018 that northbound drivers on King Road will not be stranded at Mountain Brow. Instead, King Road will connect with the Mountainview Heights development.

“You can still get through,” she said, “you’ll just have to work your way around.”

Partridge said the timing of access into the new subdivision from King Road will depend on construction of Phase 3 of the Mountainview Heights development.

She said the north-south bypass will see traffic head south from Dundas Street on Burke Street, before continuing onto Mountain Brow Road and then heading south on Waterdown Road.

“This is the start of a lot of construction that’s going to be happening with the bypass over the next two years,” Partridge said.