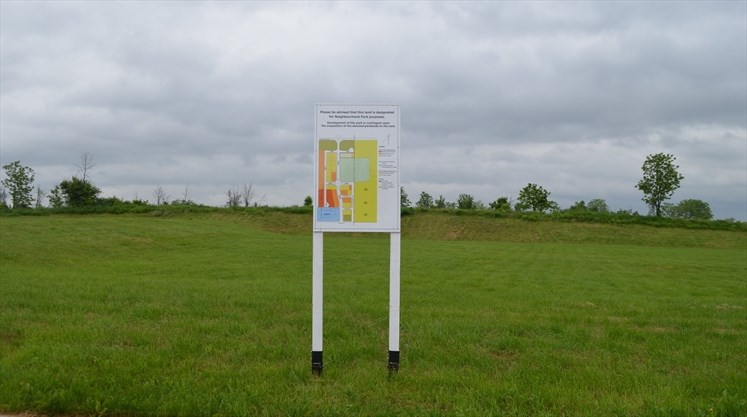 A sign stands in front of land designated for a park at the northeast corner of Sadielou Boulevard and Gunby Boulevard in Waterdown. The park has been planned for eight years, but has not been built as half of the property required is in an adjacent development that is not yet underway. – Mac Christie/Torstar

When Dianne Millar opened the Review and saw a story about an unfinished park near Nisbet Drive in Waterdown, if felt like déjà vu.

Millar and her husband Joe Jaroszek live on Bousfield Court and a planned park development near their home at Sadielou Boulevard and Gunby Boulevard has languished — often as an untamed field of weeds — for close to eight years.

“This ‘park’ has been an eyesore since I bought my home,” Millar said, adding she is the second owner of the property, having bought about five years ago. “Last summer, the weeds were higher than my two-year-old grandson and there were minimal attempts at cutting them back.

“No children play there, it is avoided by the dog walkers and it encourages invasive species growth.”

Millar said within a week of reaching out to the Review, the parkland area was mowed. About the same time, a sign was installed informing residents that the planned park would not be developed until the adjacent lands — the purview of another developer — were developed.

Sally Yong-Lee, the city’s manager of infrastructure planning, said the city has acquired the park block at the northeast intersection of Sadielou and Gunby boulevards, but there is an additional park block to the east owned Amodeo DiMarco, which is known as the DiMarco lands, that will not be acquired by the city until the development there proceeds.

“At this time we do not have any anticipated timing when the DiMarco Lands will proceed,” she said in an email. “The city will not be developing the park lands until all the lands for the park are obtained.”

Yong-Lee said there is no timeline on when a developer has to develop a park or move ahead.

“The actual development of the park is usually done by the city,” she said. “There are instances where the developer will take on that extra work and develop the park on behalf of the city.”

She said generally, the only requirement on the developer when it comes to park land is to grade and seed the property. In the case of this park, Yong-Lee said the total property is about double the existing property — about two hectares.

Ward 15 Coun. Judi Partridge said until the development on the DiMarco lands proceeds, the park is in limbo.

“There’s nothing the city can do,” she said, “Timing of developments is really up to the developer.

“It’s private property, private land, they own it and that developer decided they were not going to develop that land.”

She said the park land has just been sitting there for a long time.

“In the last eight years we’ve had a number of phone calls to my office,” she said of the Sadielou and Gunby park. “I can’t tell you how many, but I would suggest its upwards of 30 or 40.”

Partridge said it is unfortunate that people who bought their homes around the park did so with the understanding that the park was going to be developed imminently.

“It just hasn’t happened,” she said.

Partridge said she has directed staff to investigate whether the city can develop the block of land which has been developed within the Silverwood development, rather than wait for the DiMarco lands. In that case, they would have to work with the developer on grading and sodding the property.

“If we can do that, perhaps we can look at putting some amenities in there, but it’s very difficult because we’re dealing with half of a park, instead on a whole park,” she said.

She said her hope is at the very least it can be developed into an area where they local children can play soccer or fly kites, but admitted it will be difficult to include any amenities based on the size of the property.

“I’ve asked staff to put it in the 2021 budget, to put some monies aside to turn it into a basic park,” she said. “At least the families could enjoy something there.”

Millar said she finds it odd that the developer to the east has not decided to move forward.

“Who decides not to build houses in Waterdown?” said Millar. “It’s got to be multimillion-dollar gift basket.”

According to documents from the Ontario Municipal Board, DiMarco has appealed to the board citing the failure of the City of Hamilton to make a decision on a proposed plan of subdivision.

According to the documents, the appeal was launched because the city failed to rezone the property “from agricultural to residential and to approve a draft plan of subdivision to permit the development of a residential development there composed of 128 units.”

In 2011, the parties reached a settlement in the case, with a draft plan approval if DiMarco conveyed lands to the city for future arterial roadway purposes. But in 2017 the city and DiMarco reached an agreement to convey the land to city, based upon a number of conditions.

“It’s mostly young families and the kids play on the road — it’s a very family-oriented neighbourhood,” she said. “But, oh my gosh, somebody is going to get hurt because there are always kids on the road.

“I’m just worried about it.”