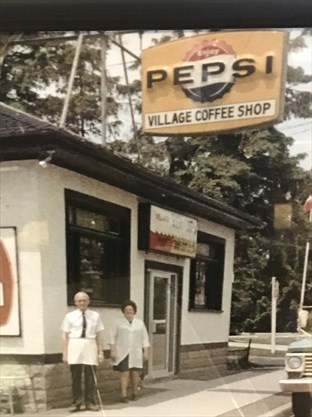 Art (left) and Rene Bos pose in front of the then-Village Coffee Shop, which they opened in Waterdown on Jan. 2, 1969. The Main Street North restaurant, now known as Village Fish and Chips and operated by their son Neil, is celebrating its 50th anniversary this year. – Neil Bos photo

Ward 15 Coun. Judi Partridge has requested that city staff expedite a heritage designation for the Royal Coachman and former Village Fish and Chips buildings in Waterdown.

In separate motions at the June 18 and July 9 planning committee meetings, Partridge had the two properties added to the city’s Register of Property of Cultural Heritage or Interest as non-designated properties, and assigned immediate priority for heritage designation. City council ratified the moves at its June 26 and July 12 meetings, respectively.

Partridge said that she pursued heritage designation for the Royal Coachman and Village Fish and Chips properties — located at 1 Main St. North and 9 Main St. North respectively — due to concerns about the potential sale and demolition of the buildings.

“One of the concerns that residents have had — and myself as well — is making sure that we preserve the heritage of the old town of Waterdown,” she said.

While the heritage district in Waterdown currently encompasses Mill Street and the intersection at Dundas Street, it does not include the Royal Coachman or Village Fish and Chips properties.

“There are about six buildings that the community thinks — and I believe — may be at risk,” she said. “At risk of being torn down and something else built there, if there is no protection on them.”

Both buildings were listed on the city’s Inventory of Buildings of Architectural and/or Historic Interest, but were not recognized or protected through designation under the Ontario Heritage Act.

According to Partridge’s motion, the owner of the Royal Coachman lands “is considering selling the property for redevelopment.” Royal Coachman restaurant owner Ross Nelson said he was not aware of either the move to designate the property or a potential sale.

As part of the Register of Property of Cultural Heritage or Interest, the Royal Coachman is protected from demolition for 60 days.

The heritage significance of the properties will be determined by staff — with each evaluated against federal, provincial and municipal heritage values.

“It gets those buildings on the list of buildings to undergo heritage designation,” she said of her motion. “They’re put on as a priority, because right now they’re relatively unprotected.

“But should anybody want to develop those lands — especially when you see a heritage building put up for sale — that’s a good indication that it needs to be protected, because you have no idea what those plans are going to be.”

The Royal Coachman property was constructed in 1868 by William Heisse and was first named the Right House Hotel in 1875. After the sale of the hotel to Patrick Kirk in 1888, the building was bricked and renamed the Kirk House Hotel, remaining in the family until 1966.

It came into its current life as a British pub in 1995.

According to Partridge’s motion, the building is representative of the Queen Anne Revival style, popular in Ontario between 1870 and 1910.

“The property displays a high degree of craftsmanship, including but not limited to the projecting bay with wood panelling and decorated barge board on the primary elevation,” reads the motion.

Personally, Partridge said that the Royal Coachman building has played a critical role in the heritage of the village and the development of Waterdown as a town.

“I think it’s critical to do whatever we can to take a look at the village as a whole and identify what buildings are there or what areas are there that would make sense to protect,” she said.

Meanwhile, the Village Fish and Chips building was built in 1929 as a Bell telephone exchange and post office. For a short time in the 1950s, it served as the East Flamborough Township police station before the building was bought by owner Neil Bos’ parents in 1968.

In 1969, it opened as the Village Coffee Shop, before becoming the Village Restaurant. In the late 1980s, Bos rebranded the business as Village Fish and Chips.

Partridge’s motion indicates that the building meets the criteria of historical associations, physical and architectural design and contextual value. In particular, “the wood-framed building, clad in roughcast stucco, with a low hip roof and projecting eaves, is a representative example of a local vernacular architectural style.”

Partridge said that the building has a lot of character and has played a significant role in the lives of many people in Waterdown.

Bos said the building and business was sold effective June 15 — his last day in operation.

While the building and business were sold as a package, Bos said he isn’t sure what the new owners plan to do with the building.

Bos said he was not aware of the move to designate the building, but said he is honoured that the building will be preserved.

“It’s a real honour to hear that they want to preserve that building,” he said. “It’s nice that the community is thinking about preserving that building and designating it as a heritage (property) — but I had not heard of that before I sold.”

Partridge said that issue is tied to the Waterdown Community Node Secondary Plan study, which will seek to create a blueprint to manage change and development in the Waterdown area.

She said the Waterdown Mill Street Heritage Committee has requested the city look at expanding the current heritage district over to Hamilton Street.

“Any expansion of the heritage district would certainly be put out for public input,” she said. “All the people who live within the area or border on the area would receive letters and be able to come to a public meeting and give their two cents.”

Partridge said that while the Secondary Plan will go out for public consultation in the fall, it will take time to work through — typically a 12-18 month timeline.

“What these motions do now is give some protection to buildings that are not within the heritage district,” she said.

She said the two properties in question form a large parcel of land — one which could be enticing for a developer who may want to tear the buildings down and construct something else.

“I would not be on side for that at all,” she said. “The motions protect that from happening.”