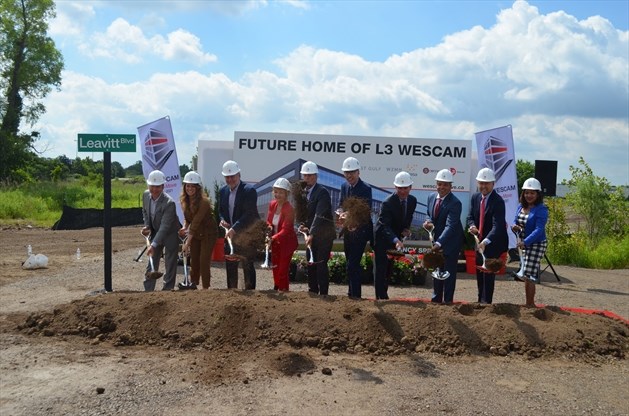 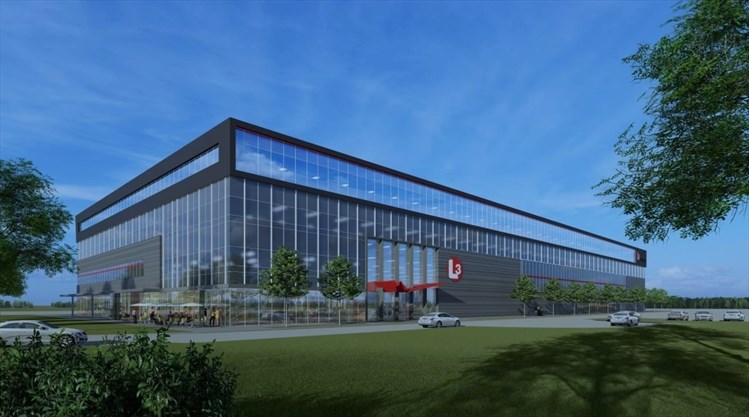 The new location of L3 WESCAM integrates two existing Burlington locations under one roof at the southeast intersection of Highway 6 North and Highway 5 in Waterdown. The new facility will be situated on approximately 18 acres of land. – WESCAM Rendering

L3 WESCAM, a world leader in electro-optic and infrared imaging technology, is moving to Flamborough.

The company, which is currently based in Burlington, announced the construction of a new state-of-the-art, four-storey, 330,000-square-foot headquarters which will be located on the south side of Dundas Street, just east of Clappison’s Corners, at a groundbreaking ceremony on June 25.

The new facility will include research and development, engineering, assembly and office space, and is expected to bring 1,200 employees to Waterdown. The company expects to move to the new location in 2021.

L3 WESCAM vice-president and general manager Jacques Comtois said the new building, located on approximately 18 acres of land, will bring the company’s two Burlington facilities under one roof. He added the move will allow teams to better collaborate and keep WESCAM on the leading edge of electro-optic and infrared technology.

“It’s all about building community — I’m absolutely thrilled.” — Ward 15 Coun. Judi Partridge“WESCAM’s story and success started right here in this city over 40 years ago and now we’re back to join other innovation leaders, like Stryker Canada, in locating in Hamilton,” Comtois said, adding Hamilton is one of Canada’s strongest and most diversified economies.

He noted the company was drawn to the “ideal” location because of its proximity to airports in Toronto and Hamilton, as well as access to trucking corridors — with highways 6, 403 and 401 in proximity — which will allow the company to continue to grow.

In addition, 70 per cent of the company’s employees live within 30 minutes of the new facility and many future employees will come from McMaster University and Mohawk College. As well, more than 300 local businesses in the local area will directly benefit from WESCAM’s presence.

“We’re very excited to have this opportunity to get started on the next chapter of our history,” he said.

MC James McAnanama said the new facility marks a return to the company’s roots. Founded in Hamilton’s west end as a camera stabilization provider in 1957, the company set up shop under founder Nox Leavitt at Clappison’s Corners in 1974.

Today, WESCAM employs 1,110 people and McAnanama said the company’s two Burlington facilities are “busting at the seams.” Since 2015, WESCAM has experienced unprecedented growth, expanding its workforce by 60 per cent over that time.

“We need a new building with a bigger roof and a lot more washrooms,” he said. “Today we pass the baton from our history to our future.”

For her part, Ward 15 Coun. Judi Partridge said the announcement has been two years in the making.

“It’s a very, very big deal,” she said. “I’m so excited and I’m so darn proud of our city staff and everyone who has been involved,” she said.

Partridge added many of the company’s current employees live in Waterdown.

“I think what I’m most excited about is the economic impact that the L3 WESCAM employees will have on our community,” she said. “It’s going to mean that restaurants that are currently here, whether it’s the restaurants, the different shopping areas — they’re going to have more sustainability.”

As well, Partridge said WESCAM moving to Flamborough has the potential to attract other major companies to the area.

“We have a couple of other big ones in the hopper right now,” said Partridge, noting she can’t say which companies. “But this is very exciting.”

She said the influx of high-paying jobs is also important because it gives young people form Flamborough and Waterdown the ability to stay within the community.

Hamilton Mayor Fred Eisenberger said the announcement represents one of the largest corporate head office investments in Hamilton in over a generation.

He added that the high-paying jobs, impressive talent in the company and global presence raise Hamilton’s tech profile significantly on the national and global scale.

“We know that L3 WESCAM are going to stay in Hamilton or a long, long time,” he said. “Thank you, WESCAM … I look forward to some serious construction happening here very, very soon.”