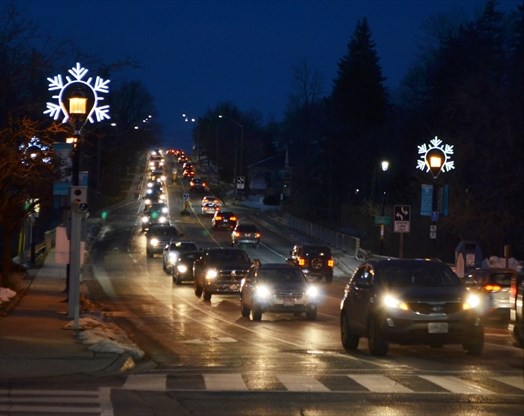 This is the fourth in a four-part series examining Waterdown’s local road infrastructure and how it has been impacted by the development boom.

For the past three years, Max DiFelice of Waterdown Collision has been looking for a new location.

The auto body shop has called Dundas Street, just east of Highway 6, home for the past 24 years. But eventually the business will have to move to make room for the long-planned Highway 5 and 6 interchange.

The interchange project will see a partial cloverleaf constructed at Clappison’s Corners, with Highway 5 crossing Highway 6 with an overpass. As a result of the project, the alignment of Highway 6 will be moved to the east by approximately 10 metres.

“We were notified of the expropriation due to the interchange back in 2010,” DiFelice said. “The first couple of years that concern was always there — what am I going to do? Where am I going to move?”

However, the MTO evaluation on the property’s value came back as inconclusive.

“So from that point forward we’ve just been sitting and waiting,” DiFelice explained.

But he said the project will at some point take place, at which time the business will be forced to move.

So DiFelice has tried to be proactive by finding a new home. And for the past three years, the business has been actively looking for a piece of property in east Flamborough to build its new home.

“I don’t want to sit and wait until they say, ‘Ok, this is the date we need your property,’” he said. “I want to purchase a piece of property — it takes three or four years to get through the planning process and be ready for it.”

He said the business’ current building was designed specifically to maximize workflow.

“We built and designed the building specifically for efficiency and workflow,” he said. “We’re putting through almost 90 cars per week.”

DiFelice said one of the difficult aspects of a move is they can’t simply relocate the existing equipment to a new building.

“So we’re looking at about $8 million in costs to rebuild and re-equip a new facility.”

He noted the biggest issue the business has had is trying to find land east of Highway 6.

Ironically, the growth that has necessitated the interchange that will displace the business is also making it difficult for Waterdown Collision to find a new home.

“There’s nothing to be had — the developers have bought everything,” DiFelice said, noting he has been making offers on properties over the past three years with no success. “We’re talking over $1 million an acre now.”

“There’s nothing — you cannot find a piece of property,” he continued. “I don’t think I’m going to walk away with this under $10 million.”

So why is the interchange necessary? In one word: traffic.

Former Ancaster-Dundas-Flamborough-Westdale MPP Ted McMeekin said he can recall the interchange being discussed when he was still Mayor of Flamborough in the late 1990s. Like the other traffic projects in Waterdown, it was a byproduct of growth.

The official beginning of the interchange project took place in 2003, when the MTO undertook a preliminary study for the project that was meant manage the “long term transportation needs of the Highway 6 corridor, while developing a strategy to enhance safety and address future capacity issues.”

To that end, the study recommended a “new interchange to replace the existing at-grade intersection of Highway 5 and Highway 6 to accommodate future traffic demands.”

According to MTO projections from 2013, those demands are supposed to be staggering. In fact, traffic demands on Highway 6 are expected to double within 20 years. By 2031, projections indicate “that existing Highway 6 will exceed capacity, particularly at signalized intersections along Highway 6.”

For reference, a City of Hamilton traffic count from November 2018 found that more than 73,000 vehicles went through the Highway 5 and 6 intersection. Of those, more than 28,000 were southbound to Highway 403, while almost 18,000 were headed north.

In addition, in 2010 the MTO identified the need to widen Highway 6 to six lanes through the interchange and to widen Dundas Street to six lanes between Highway 6 and Clappison Avenue. The widening should accommodate 2031 traffic projections.

According to a 2013 detail design study presented to Hamilton council, the interchange project is expected to impact more roadways than just Highway 5 and 6.

In the southwest quadrant of the intersection, the project proposes an access road to the existing Wendy’s-Tim Hortons-Petro Canada plaza.

As well, South Drive will be closed at Dundas Street and a road will provide access to Highway 5 from the southern end of Innovation Drive. It will connect with a new street on the northwest side of Highway 5, which will access Harry Howell Arena and Beverly Tire — in addition to other businesses in that quadrant.

As well, Highway 6 will have a median installed from the intersection north to Parkside Drive, and no driveways will have direct access to Highway 6.

In the southeast quadrant of the intersection, a new street will connect with Mountain Brow Road and provide access to Liburdi Engineering and three residential lots in the City of Burlington.

Meanwhile, the northeast quadrant of the intersection is slated to be home to a carpool lot with more than 100 parking spaces. The intersections to the east and west of the new bridge will have full illumination and new traffic signals.

So when will the project get underway? In an email, MTO senior issues adviser Katrina Lalor said the project is not included in the ministry’s five-year program of projects.

On that note, Ward 15 Coun. Judi Partridge was successful in moving a motion in 2015 directing the province to delay the interchange — at least until other much-needed traffic projects in Waterdown are completed.

“It directed the province that the bypasses — east-west and north-south — needed to be completed,” she said. “Plus, the bridge replacement at Grindstone Creek, before they did the interchange.

Partridge told the Review in 2017 that the Grindstone Bridge project likely won’t take place until 2025 as the bypass routes have to be completed prior the replacement, which will close Dundas Street for at least six to eight months.

She noted the construction time frame for how long the interchange project will take is unknown.

“I suspect it’s going to be three to five years,” she said of the construction.

But the MTO has been undertaking some property acquisition for the project under a willing seller-willing buyer basis. In 2015, then-MTO senior project engineer for the interchange project Makael Kakahel said 12 properties has been acquired, with plans to demolish them.

Lalor said the remaining properties will be acquired once the project is programmed for construction — or when funding is available.

“The Ministry will only acquire the properties needed to construct the project,” she said.

Lalor added the project cost was estimated at $35.4 million in 2013. However, she cautioned the estimate does not include the cost of property acquisition.

“The construction cost estimate will be updated when the project is placed on the Ministry’s five-year construction program,” she said.

According to city documents, the city’s cost is capped at $7.5 million for interchange construction and relocation, while Hamilton will pick up 25 per cent of all property costs.

She added the project is currently in the detail design phase, but the design is based on the 2013 alternative presented to Hamilton council. The design will be finalized once the project is programmed for construction, Lalor added.

But there is some question as to whether the interchange project will help Flamborough businesses.

Matteo Patricelli, the executive director of the Flamborough Chamber of Commerce, said there are a lot of questions and uncertainty within the business community about the interchange project.

“Is better traffic flow better for businesses? We still need to study that.”

For DiFelice’s part, he said it will definitely help the congestion at Clappison’s Corners.

“It will definitely relieve the congestion of traffic,” he said. “My worry is it’s going to continue to bring more traffic through the centre core of Waterdown — and that’s a huge problem.”

DiFelice noted the business, which was previously located in the area of Hamilton and Dundas streets in the Waterdown core for 24 years, has seen the growth in Waterdown and Flamborough first-hand.

At their current location on Dundas Street near Highway 6 he estimates they have seen a 500 per cent increase in traffic.

“You can’t even pull out of this building at 4 p.m.,” he said. “To head west out of my building it’s probably easier to head east first and then turn around at Canadian Tire and head west.

In fact, he said the business needs to move due to safety issues with traffic coming in and out of the property.

“It’s at the point where I’ve got to get out of here — it’s dangerous for customers pulling in and out,” he said. “In the last year I would say six or seven accidents have happened … because of people actually trying to pull out of our building.”