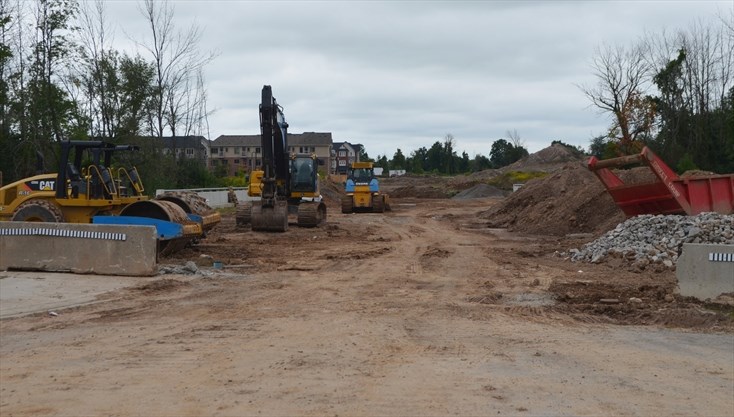 Construction equipment is beginning to work on a section of the Waterdown east-west bypass at the north end of Wimberly Avenue. The section of the bypass, which will run from Mosaic Drive to Babcock Street, is slated to be complete by the beginning of December. – Mac Christie/Torstar

A section of the Waterdown east-west bypass is finally getting under construction.

The bypass section, known as North Waterdown Drive, will run from Mosaic Drive to Babcock Street.

Ward 15 Coun. Judi Partridge said construction is slated to get underway over the next month, with the roadway expected to be complete by the beginning of December.

The section of the bypass behind the developments north of Parkside Drive will be built by the respective developers, under an agreement with the City of Hamilton.

The whole project is being done in sections, with the section that will connect to Centre Road not under construction until the spring.

The section east of Centre Road, which includes upgrades to Parkside Drive — connecting to Avonsyde Boulevard — is the remaining piece. Partridge said that section is of the east-west bypass is key, and one she expects will make a difference in alleviating traffic congestion.

“I want to see sections built that are actually going to make a difference with the traffic,” she said. “Connecting it to Centre Road, yes that will make some difference, but the real important piece to me is the piece from Centre Road over to Avonsyde.”

When fully complete, the east-west bypass is slated to run east from Highway 6, across Centre Road and connect with Parkside Drive and then Avonsyde Boulevard.